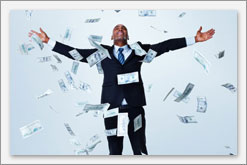 In May 2011 the banking industry agreed that there had been wide mis selling of PPI. Billions of pounds in compensation has been paid out so far.

Who can claim for Mis Sold PPI?

If you believe you were mis sold PPI you are eligible to claim. There are a number of indicators that will help you understand whether this was the case. These include things like being pressured into taking out the insurance or not being clear that it was optional.

If you are currently paying off debt using a DMP, IVA or you are bankrupt claiming for PPI is still possible. However you may not receive the compensation payments directly.

How to claim for Mis Sold PPI?

Claiming for mis sold PPI is relatively straight forward. You simply need to write to the bank involved stating the reasons why you feel you are due compensation.

There is nothing to stop you making the claims yourself although you also have the option of using a commercial claims management company if you wish.

If you have already been through an IVA you will normally need to use a specialist Claims Management Company to help you.

Claiming for PPI whilst in a DMP

If you are currently in a Debt Management Plan (DMP) you may think that you are not able to make PPI claims. This is not the case. Making claims during your Plan is certainly possible.

If your claims are successful the compensation may not be paid directly to you. The bank can automatically use it to reduce the debt you owe.

If you are currently bankrupt you will gain no direct benefit if you make a claim for mis sold PPI. Any compensation payment you receive will be treated as a windfall and have to be paid to the Official Receiver (OR).

Even after you are discharged from Bankruptcy you will normally gain no benefit from making PPI claims. The payments you are awarded will be unrealised assets and the bank is still likely to pay them to the OR.

Claiming PPI while in an IVA

If you are currently in an IVA any compensation that you receive from a mis sold PPI claim is treated as a windfall. As such it must be paid to your IVA company.

If possible you should wait to make your PPI claims until your Arrangement is over. However this may not be possible as many IVA companies will now require you to make claims during the agreement.

Claiming PPI after an IVA has finished

If you have already been though an IVA and some of your original debt was written off you can still claim for mis sold PPI. The fact that you were mis sold is a separate and stand alone issue.

Having said that you may need to get the help of a specialist Claims Management Company. Otherwise there is a good chance that you will not receive the compensation you are due.