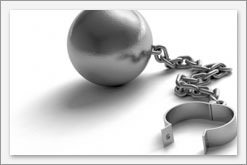 When your bankruptcy ends you are released from the restrictions that were placed on you. This is known as being discharged.

What happens after I am discharged from my Bankruptcy?

Normally you will be discharged from Bankruptcy after 12 months. What does being discharged mean? Will you still have to make your IPA payments? What happens to your debts after you are discharged? To find out more please visit: http://beatmydebt.com/bankruptcy-frequently-asked-questions/how-am-i-discharged-from-bankruptcy

When are you Discharged from Bankruptcy?

You will normally be discharged automatically 12 months from the start date of your bankruptcy. This is a standard period. Three months later your details will be deleted from the Insolvency Register.

Prior to October 2013 it was possible to get early discharge. This would happen if the Official Receiver (OR) had concluded their investigation of your affairs and felt that there was no benefit to you remaining bankrupt.

However after the introduction of the Enterprise and Regulatory Reform Act in October 2013 the OR no longer has this power. As such for most people bankruptcy will end after the full 12 month period.

Could your Discharge from Bankruptcy be delayed?

The date of your discharge could be suspended. This means that you remain bankrupt for longer than 12 months. It means you are not released from bankruptcy until either the Court or the Official Receiver decides otherwise.

Such a suspension will only happen if you do not cooperate with the Official Receiver or do not comply with the obligations introduced by your bankruptcy.

Your discharge can be suspended indefinitely until an obligation is met. Alternatively it could be suspended for a specified period of time.

Even if you are discharged after 12 months some of the restrictions placed upon you could still be extended with a Bankruptcy Restrictions Undertaking (BRU) or Order (BRO).

What happens after Discharge from Bankruptcy?

After discharge your outstanding debt is written off. You are then free to carry out things which you were restricted from doing as a bankrupt.

It is now possible for you to become the director of a company and take up other roles which were previously restricted. You can also borrow more than £500 without having to declare to the lender that you are bankrupt.

However if you are making payments towards your debts in the form of an Income Payment Agreement or Order you will have to continue to do so. An IPA lasts for 3 years regardless of the date of discharge.

If you are paying an IPA or IPO this will usually continue after the date you are released from your Bankruptcy.

How can I Complain about my IVA? »

« Can I travel abroad if I am bankrupt?